We all have relationship goals, don’t we? Everyone’s goal is different.
Sometimes we look at celebs and say they are relationship Goals or we see other couples and say they are relationship goals. The fact is we can’t say that because we don’t know what goes on behind closed doors. I mean no relationship is perfect. I’m not saying you can’t admire couples or take a page from their book but saying they are relationship Goals to me is a little bit extreme. Some might agree and some might disagree.
Some of us have relationship Goals like, building a life together, wearing matching outfits. Getting dream cars while having one that you share, getting a house, being able to show off each other by posting pics of each other, graduating together, falling asleep in his arms while he plays video games you name it.
Some have those goals while some people’s relationship goals are trying to keep communicating better and better each day. Being able to talk to each other about anything no secrets no lies, working on having a better life together, working hard, we all have our different relationship goals. Not because a person’s relationship goal is different or it might not be same thing that you would do, doesn’t mean it isn’t a goal it still is everyone’s goal is just different.
There is that extremely big relationship goal that most of us dream of. Can you tell me what it is? Waiting! waiting! did you guess your answer?. What is it?. Tell me tell me, oh I know MARRIAGE!. Majority of us has that relationship goal on our agenda for girls we dream of being proposed to. We dream about our wedding day wanting it to be special whether big or small. For the males, they dream of getting the answer yes and they dream of seeing their beautiful bride coming down the Aisle and saying I do. Most of us have this dream.
There are others who don’t have relationship goals they just go with the flow. Not because they don’t have goals don’t mean they don’t want a relationship or that they don’t care about having one. Some people will eventually warm up to the idea of having goals while some just want to go with the flow.
Some people do reach their relationship goals because they work hard towards it. They stayed through thick or thin good times and bad. While some gave up along the way. Don’t judge that person if they gave up because sometimes there is so much that a person can handle until their cup over flows and as I stated before you never know what’s going on behind closed doors. 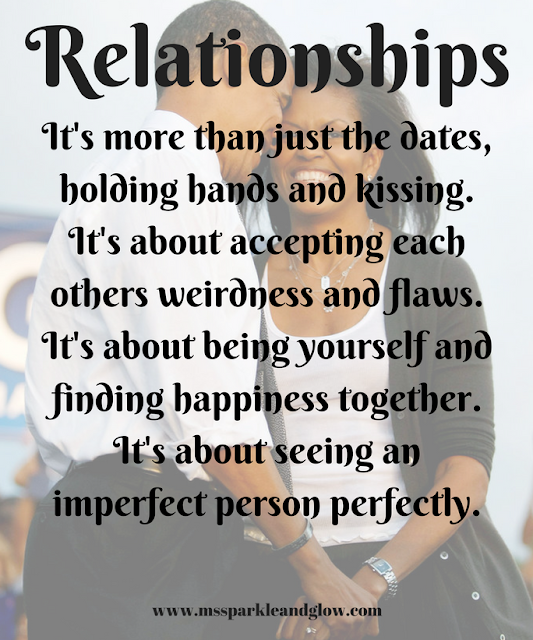 Take Michelle and Barack Obama as an example. Look at them they are prime examples of a good couple. I personally admire them don’t you?.

Its Ok To Be Single | MsSparkleAndGlow

Why is communication important in a relationship

Lost In Love/Blinded by love