Hey loves!!! How was your weekend, what plans do you have for the week, any new goals?

We all know when can be soo stubborn at times, but at the same time so are we!!
They never want to listen sometimes because they think they know it all because they are men, they feel they must always have the last say or word. 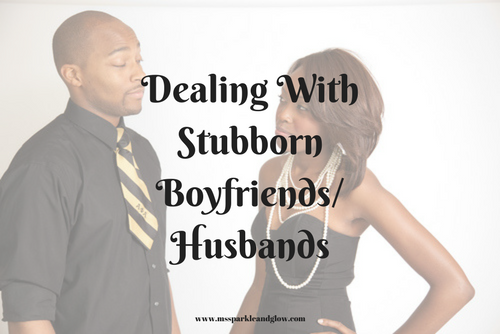 You talk to them it goes through one ear and comes through the other and then in the end it’s either they can’t say that you know you were right so they hide it until you find out or they come being all soft and sentimental saying you know you were right i should have listened to you, if I had usto listened that wouldn’t have happened but then they do it all over again.

If they would only listen sometimes some mistakes and losses they go through they wouldn’t if they just had listened.

What i find works is the silent treatment if you keep talking and he doesn’t listen just give him the silent treatment don’t mention the situation again just leave it be, because if you keep talking and he isn’t listening continually talking won’t help either. When he finally makes his mistakes or realizes he was wrong he will come around  and as i said above it’s either he says you were right I should have listened or he just can’t admit that he was wrong or he should have listened.

Sometimes it’s best when you apologize also even if your not wrong just apologize to keep the peace but also never leave a conversation unfinished, wait until another time and pitch the conversation in a different way and try to take it in a better direction than the first time, sometimes it’s the way how we talk to them and the things we say, don’t come across as too harsh,hard and demanding because those are things that makes them get upset and stubborn.

What are things you do to deal with your stubborn boyfriend or husband? Does your technique work?
Let me know down in the comment guys and don’t forget to share and subscribe!! have a wonderful day

Her Lessons In Love: Part 8

Sex isn’t the most important thing in a relationship